Observations from Kielder Water & Forest Park indicates that two of the colour ringed juvenile ospreys born this year have set off on migration with more set to follow in the forthcoming weeks.

Breeding pairs of ospreys have nested in Kielder between March and September since 2009, with activity on the nests tending to be mainly throughout May to August as the chicks hatch, are fed and then take to the wing and practice hunting.

Osprey mothers usually leave on migration to Iberia or Africa around the middle of this month, with the fathers and youngsters following individually at the end of August.

The ospreys have become a beautiful part of the Northumberland skies and a big hit with the public who, have able to watch their lives unfold via locally-streamed nest cams and a new cabin at Tower Knowe.

Following the decision in 2017 to start an alphabetized naming scheme for ospreys that hatch at Kielder, the 2022 chicks will all be named after parts of Northumberland beginning with the letter F.

This year has been a milestone for the Kielder Osprey Project with 14 youngsters successfully fledging (taking their first flights and gaining experience flying) this year and  a total of 106 birds sucessfully  fledging between 2009 and 2022.

In addition, three Kielder offspring bred outside of Northumberland this year, raising 9 ‘grandchicks’ for the Project. So not only is the osprey population doing well locally, it is contributing to the growth of the UK population.

Kielder Osprey Project Lead Volunteer, Joanna Dailey said: “To start seeing ospreys flying around and then leaving Kielder is such a wonderful sight. We have a breather for a couple of months before all eyes turn skywards again in March ready for their return.  They a now a firm fixture in the life of Kielder Forest.”

The partners are working hard to ensure that the ospreys are here to stay by maintaining a high quality habitat in Kielder Water & Forest Park and safeguarding and monitoring the nest sites. 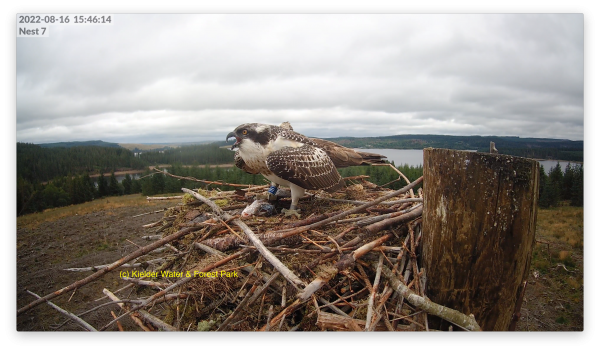