The Kielder ospreys are adding to their numbers with 2022 bracing itself for a century milestone.

This summer could see the 100th osprey fledged in Kielder since the species’ reintroduction in 2009.

Seven chicks have already hatched and are thriving, while there are further eggs on nests across the forest, bringing the hope of even more new arrivals of the rare species.

Amazingly, for the fifth time, the couple who have settled on Nest 1A have delivered four chicks.

This is an unusual feat for most - but it has become the norm for YA and Mrs YA, who are expanding their family a week ahead of those on other nests.

This is the fourteenth year that ospreys have returned to Kielder, following recolonisation in 2009, prior to which the species hadn't been witnessed breeding in Northumberland for almost 200 years.

Since then, 92 chicks have successfully fledged and there is confidence that 2022 will see the 100th - with multiple chicks expected to hatch in the next couple of weeks.

Graham Perry, Director of Kielder Water & Forest Park, said: "We're really pleased with the way things are going for the ospreys so far this year. “We've been able to confirm seven chicks already, but we know that there are more eggs across the other nests and we’re excited to aim for that magic number of 100 fledged chicks.”

"This is brilliant news and we are really excited to see how many more we get and to start the naming process in the coming weeks.

“This year, the chicks will be named after Northumberland places beginning with F, as we mark the sixth year of the new naming process."

Kielder’s Osprey Watch returned this year – and videos, images and updates are being regularly posted by Joanna Dailey of the Kielder Osprey Project on her blog at kielderospreys.wordpress.com.

Over the past 14 years, Kielder Water & Forest Park has been proved to be the perfect environment for ospreys to thrive, with 250sq miles of forest surrounding the birds as well as the open water of the biggest man-made lake in northern Europe.

The Kielder Osprey Project is a partnership between Kielder Water & Forest Park Development Trust, Forestry England, Northumberland Wildlife Trust, Northumbrian Water and Calvert Kielder. The partners are working hard to ensure that the ospreys are here to stay by maintaining a high quality habitat in Kielder Water & Forest Park and safeguarding and monitoring the nest sites. 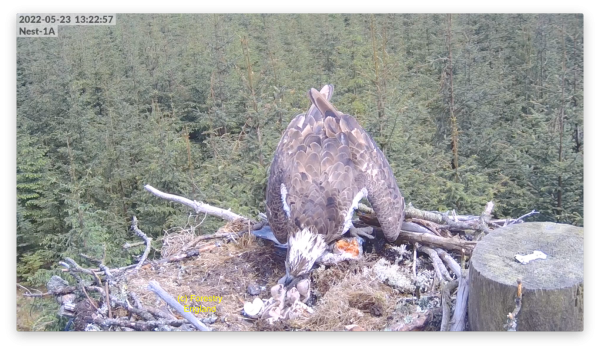