Osprey eggs laid at Kielder for the thirteenth year!

Wonderful news from the Osprey Team at Kielder.

Following the return of the ospreys to Kielder from the end of March, there are now 16 eggs on five nests in the Forest.

Whilst everybody is complaining about the cold weather this April, spare a thought for the females, who are having to do nearly all the incubation in chilly weather - a far cry from the hot weather which most will be used to.

All bar one of the breeders from the seven successful nests last year (2021) are back and, even better news is that two ospreys born in Kielder are among them.

The Nest 7 female KX7 has laid three eggs, with the last egg laid toward the end of April.

Elsewhere throughout Kielder Forest 13 more eggs have been laid, including Nest 1A which has a full clutch of four eggs for the fifth time in six years. Nests 2 and 8 don’t have any camera coverage so insight into the number of eggs laid is sketchy.

Following the decision in 2017 to start an alphabetized naming scheme for ospreys that hatch at Kielder, the 2021 chicks will all be named after parts of Northumberland beginning with the letter F.

Breeding pairs of ospreys have nested in Kielder between March and September since 2009, with activity on the nests tending to be mainly throughout May to August as the chicks hatch, are fed and then take to the wing and practice hunting.

The ospreys have become a beautiful part of the Northumberland skies and a big hit with the public who are able to watch their lives unfold via locally-streamed nest cams and from a new cabin at Tower Knowe.

Each weekend, and every Wednesday from now until Saturday 14August between 10.30am and 4:00pm, Northumberland Wildlife Trust and its team of hardworking volunteers are running Osprey Watch from the Tower Knowe cabin. Following a two year break due to covid, visitors are being offered views of the activity on the nest via telescopes, and a high quality close up on nest 7 via the nest cam on screens in the cabin.

Live images from two nest cams are also being streamed to public screens at the mobile Street Diner at Kielder Castle.

The partners are working hard to ensure that the ospreys are here to stay by maintaining a high quality habitat in Kielder Water & Forest Park and safeguarding and monitoring the nest sites.

Keep up to date with the ospreys at www.kielderospreys.wordpress.com 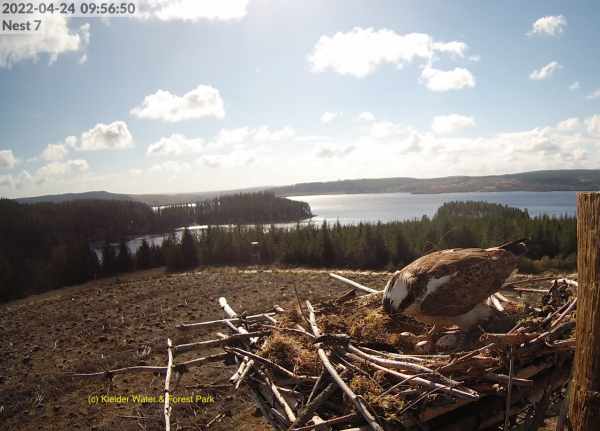