Conservationists in Kielder Water & Forest Park have hailed the incredible success of an osprey love match.

The duo – known as Mr and Mrs YA - began breeding together in 2013 when they had their first offspring on a specially built platform in the 62,000-hectare (155,000-acre) Northumberland woodland.

Since then 22 of their chicks have successfully fledged and this year’s brood should see them hit the quarter of a century mark.

“Their impact on our growing osprey population has been tremendous. Ospreys are pretty faithful to each other and these two are the perfect match.  He’s an excellent hunter and brings back plenty of fish feed the family. She is just as effective as a mother, making sure each chick gets a share and keeping them warm. They are always one of the earliest couples back from their wintering grounds in Africa. Not surprisingly we've become very attached to them."

Endangered ospreys were extinct in England as a breeding species in the 20th century. They returned to Kielder Water & Forest Park in 2009 after nest platforms were erected, producing the first chicks in Northumberland for at least 200 years. Since then the naturally re-colonising population has taken hold, thanks in no small part to Mr and Mrs YA.

“The success of this nest and others has made Kielder Forest one of the bird's English strongholds. Plus it has significantly increased the likelihood that this iconic species will spread throughout the rest of the country. That’s nature recovery in action in England’s largest working forest. By working with our partners we have been able to produce a wonderful habitat of woodland and water.”

Ringing chicks is vital to help experts keep tabs on the osprey population.  Because of it we know that Mr YA was actually born in Wales in 2007 to a father who himself was a prolific breeder.  Today the youngsters were gently lowered to the ground by Forestry England climbers and fitted with a unique identifying ring on one leg, which they will wear all their lives.  On the other a numbered blue coloured tag was attached to indicate they are ospreys born in England and Wales.  This tag can be easily read using cameras and spotting scopes so ospreys can be tracked through their lives. They were also weighed and then returned to the nest unharmed.

Cameras on five of the eight occupied nests in Kielder have given experts a unique insight into osprey behaviour. The public can enjoy the same views via live feeds at Kielder Castle and Northumbrian Water's Tower Knowe.

The chicks will need to grow up fast.  After plucking up courage to make their first flight, they will learn how to hunt, before embarking on a perilous journey south to warmer climbs, as far away as sub-Saharan Africa. 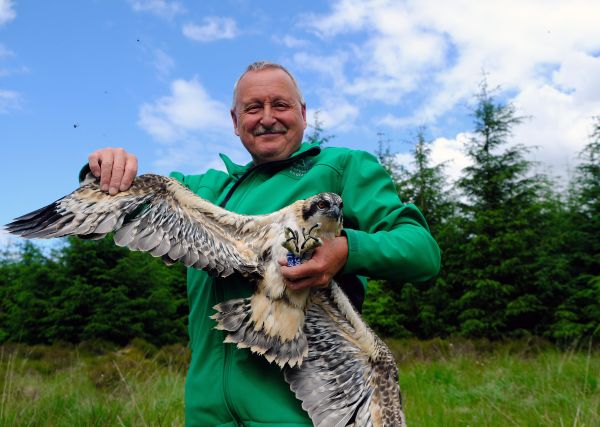