Kielder chicks first of their kind for two centuries

For the first time in at least 200 years chicks have been born to osprey fathers who themselves fledged in Northumberland.

Experts today (Monday, 19 July) visited a remote site to ring one of these chicks, named Elsin, after a nearby Northumbrian fell.  Forestry England climbers gently lowered the docile youngster to the ground from its nest where it was fitted with a unique identifying ring on one leg, which it will wear all its life, and a colour tag on the other to indicate it’s an English osprey.  It was also weighed before being returned to the nest none the worst for the experience.

“Three more chicks on a separate nest also have a Kielder born Dad which signifies a big step forward. Kielder Water and Forest Park is now an osprey stronghold and a crucial staging post in what we hope is the natural re-colonisation of northern England. We have an amazing habitat for ospreys and have come a long way over the past decade.”

The Kielder Osprey partnership has also revealed that a record number of ospreys are likely to fledge in the forest park, with at least 16 healthy youngsters on seven nests.

High definition cameras are monitoring most of these sites, giving conservationists and the public via a live feed at Kielder Castle a unique insight into osprey lives.  Local volunteer Joanna Dailey, who has followed bird's fortunes at Kielder for over a decade, added:

“Elsin’s Dad was born in 2014 and was not only ringed, but also fitted with a satellite tag.  It took him until April the following year to reach Senegal, where he stayed for a couple of years.  Driven by a  homing instinct, he first came back to Kielder in 2016 after an epic journey when he was thrown thousands of miles off course by a sandstorm.  Last year he tried to breed, but the eggs failed.  He then got jilted by his partner, but happily found another female this year and together they have produced Elsin.  Ospreys are iconic and incredible birds and being able to follow at least part of their adventures is a real privilege.”

The next stage for all the chicks is to pluck up courage to make their first flight.  They will then hone their flying skills on Kielder Water before embarking on a long journey to their wintering grounds, usually in sub-Saharan Africa.

Ospreys were once distributed widely throughout the UK, but persecution resulted in the species becoming extinct as a breeding bird in England in 1847 and in Scotland in 1916.   Because of their historical decline they are an Amber List species.  Chicks fledge about seven weeks after hatching and a fully grown adult can have a wingspan of over five feet.  The bird normally breeds for the first time when it is aged between four and five years old.  Males in particular have a strong instinct to return to the place of their birth. To find out more about Kielder ospreys visit the blog at  https://kielderospreys.wpcomstaging.com 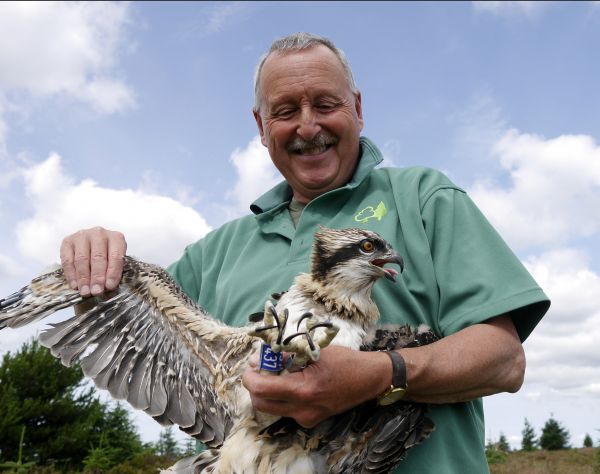