Thousands complete the tenth year of Britain's most beautiful marathon

They kicked off day two of the Active Northumberland Kielder Marathon weekend, which saw more than 1,200 athletes participating in the Kielder Half Marathon and over 100 children in the Junior Races.

In total, more than 3,500 runners and cyclists took part in the weekend, which included a 10K race and a Run Bike Run duathlon at Northumbrian Water's Kielder Waterside site the day before.

The Marathon winner was Iain Twaddle from Durham, who crossed the finish line in just 2hours 45mins and 56secs. Lucie Custance was the first female through, in 2hours 59mins and 46secs.

Craig Gunn was the winner of the Half Marathon, finishing in 1hour 16mins and 20secs, while the first female was Gemma Hillier-Moses. She crossed the line in 1hour, 25mins and 06secs.

Steve Cram, Race Director at Events of the North, said: "Well that's our tenth Active Northumberland Kielder Marathon under our belt and what a weekend it has been.

"The atmosphere has been incredible, even a bit of rain couldn't dampen the spirits of our runners today or their loved ones who came to see them cross that finish line.

"We were delighted to have a number of our ‘ever-presents' joining us for our special birthday today too. These people have been with us since day one, just confirming what we know - that this really is Britain's most beautiful marathon and once you've done it once, it gets under your skin.

"With 7,000 competitors and supporters attending over the weekend, representing over 33 countries, it's a fantastic opportunity to showcase Kielder and Northumberland to a global audience.

"The event is now a firm fixture in the sporting calendar, and we congratulate everyone who contributed to making it such a success."

David Hall, Head of Leisure, Strategy and Transformation at Northumbrian Water, said: "This has been an incredible weekend of celebrations for the tenth anniversary of Britain's most beautiful marathon, centred around our stunning Kielder Water reservoir.

"We'd like to say a huge well done to everyone that has taken part, supported, volunteered or helped make it happen. Everyone has played their part in making it yet another amazing year." 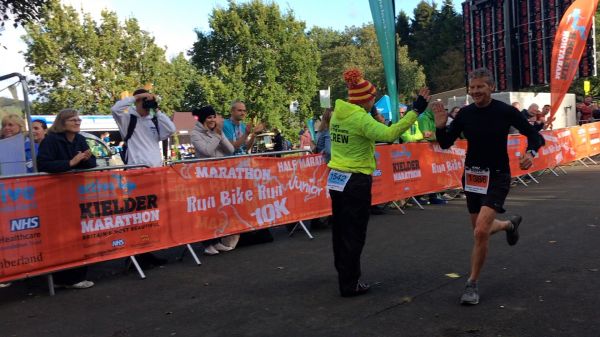