The long distance Reivers Cycle Routes are a brace of signed / waymarked bi-directional ‘coast to coast’ cycle routes between the North Sea and the Irish Sea.

Cycle route meister Ted Liddle created the original Reivers Cycle Route in 1998 which was later adopted by Sustrans as part of the National Cycle Network. The original on-road and off-road options soon morphed into a one-size-fits-all NCN route which never worked well.

After a long time lapse, Ted Liddle has initiated re-energising the Reivers Cycle Route in the form of two intertwining route options – one which is as much off-road as possible suitable for gravel and cross bikes, hybrids and mountain bikes and a version designed for capable road cyclists which is 100% on tarmac.

The routes are bi-directional and whilst the NEW route map shows the alignments east to west, both directions continuously reward the rider with fine views of the constantly changing terrain. There are many places of interest to pass by or call in, lovely villages and quiet hamlets to cycle through or stay the night in and most importantly, there is an adequate supply of excellent refreshments stops.

The off-road route will be waymarked with dark red coloured waymarks and the on-road route will be signed using standard blue coloured cycle route signs. The route logo is a bright lime green detailing two crossed swords being the weapon most favoured by Reiver clans. Reivers were raider families that in habituated the borderlands between the 13th and late 17th centuries.

Income from map sales will contribute towards managing and improving the route. A new website will go live very soon. Cyclists are encouraged to donate to

The Reivers Off-road Adventure Route is a new style of waymarked long distance cycle route which requires a greater level of self-sufficiency than traditional road-based cycle routes. ROAR is a ‘coast to coast’ journey as off-road as possible encompassing an incredible variety of landscapes in a truly imaginative way by utilising miles of wonderful off-road tracks, old drovers roads, hidden bridleways linked by quiet country lanes.

The Reivers On-road Challenge Cycle Route will provide an opportunity for road cyclists to safely and enjoyably cycle a scenic ‘coast to coast’ route which is 100% on-road passing through remote locations. This route version will start / end at Ponteland although Tynemouth will remain an optional start / end with information that this section is a mix of gravel and hard top.

En route it is possible to: experience iconic landmarks beginning / ending at Tynemouth with its many historic connections, sandy cove, twin piers, castle and priory; ride through hidden parts of Northumberland with its rich heritage; traverse Scandinavian-like Kielder Water and Forest Park; nip into Scotland to stay overnight or for refreshments, cycle through the unspoilt Forgotten Lands between the Borders and Carlisle, cross the line of Hadrian’s Wall; ride past Carlisle Castle; take in little known corners of Northumberland National Park and enjoy the northern edge of the Lake District National Park arriving at, or departing from, Maryport’s magnificent historical harbour on West Cumbria’s World Heritage Site coastline.

The Reivers Adventure Cycle Routes will appeal to a variety of touring cyclists looking for an achievable challenge and an opportunity to safely ride a ‘coast to coast’ route which is either as much off-road as possible or is entirely on-road.

Undoubtedly both route options truly are challenging journeys of discovery comprising many miles that are ‘off the beaten track’ just waiting to be explored. 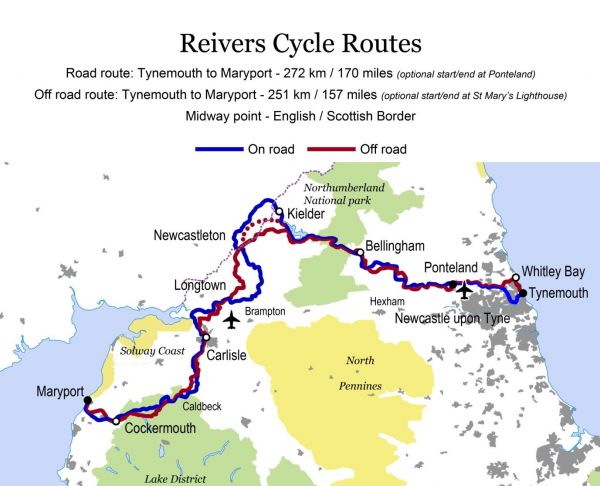