Camera footage has confirmed pine marten in Kielder Water & Forest Park for the first time since planting in 1926. This is great news for the partnership of organisations working together for pine marten conservation in northern England, including Forestry Commission England, Northumberland Wildlife Trust, Aberdeen University and Vincent Wildlife Trust.

The cameras are in a remote area of Kielder Water & Forest Park as part of a red squirrel monitoring project and while many other species are frequently captured this is the first time pine marten have been spotted. The images were first seen by John Hartshorne, who manages the fieldwork and ecology education organisation Albion Outdoors and has been helping with the squirrel surveys as part of the Red Squirrels United project for several years now.

”It is very common to see wildlife other than squirrels on the cameras I use. Badgers, foxes, deer and birds of all sorts are regular visitors. This July I have caught some excellent pictures of red squirrels but also an unexpected visitor – a pine marten, sitting on top of one of the squirrel feeders. This was most unexpected but I now have both still pictures and a short piece of video firmly placing pine marten in Kielder Water & Forest Park. Historically, pine martens were commonplace but habitat clearance and persecution has led to them being eliminated from nearly all of England".

Pine martens are elusive members of the weasel family and their biggest UK stronghold is in Scotland.

“It is great news that we are starting to see further evidence of pine martens re-establishing themselves in northern England. The Vincent Wildlife Trust has been heading a species recovery programme for pine marten in Britain for many years. It’s fantastic to be part of such a varied group of organisations that are working towards the successful re-colonisation of northern England”

“As the forest nears 100 years in age, it is increasingly being colonised by rare and protected species. Pine marten returning to England, over the Scottish border, have been anticipated for some time, encouraged by the efforts we are making to create ecologically diverse forests. We are delighted to see photographic evidence of their return, in a forest valued by so many people”

Ongoing studies in collaboration with the University of Aberdeen will provide evidence on how pine marten influence other species in Kielder Water & Forest Park, which have themselves previously colonised the maturing woodland. Recent research carried out by Aberdeen University found that in Scotland, areas where pine martens were increasing, red squirrels also increased, but grey squirrel numbers plummeted drastically. This could have huge implications for organisations involved with trying to conserve reds in the UK and across Europe.

“It is well documented that grey squirrels out-compete red squirrels for food and also pass on a deadly virus, squirrel pox, to reds: this is one of the main reasons that the species in under threat. The natural return of pine martens in areas of northern England is an exciting prospect, as it could have a knock on effect by suppressing grey numbers, allowing native red squirrels to prosper once again in our woodlands”

“We are very excited that pine martens have been seen around the Kielder area. As a natural predator they have the potential to help manage the grey squirrels and they are a part of our woodland and forestry ecosystem so we need them here. They will also be great from a nature tourism perspective. We look forward to working with Forestry Commission England and the Vincent Wildlife Trust to help them establish a colony over time.”

Being an important red squirrel reserve, partners at Kielder Water & Forest Park are very excited to welcome the pine marten into their woodlands. 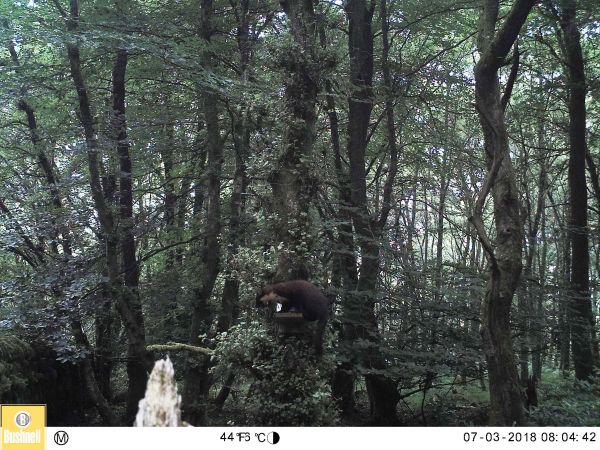