The Liverpool University student, who only decided to take part last week, completed the 10k race across Northumbrian Water’s giant reservoir in 2 hours 33 minutes and 18 seconds. Other distances on offer were 3.8k ‘iron’ distance and the classic one mile.

Helen said: “The swim was really good fun. I thought I was going to have to sing songs in my head to keep me going but it went a lot quicker than I thought it would. The water was cold at the beginning but it was nice at the end, it was actually very refreshing!”

Nick Valentine, aged 33, from Gosforth, Newcastle, was the winner of the 3.8k swim, completing it in 51 minutes 47 seconds. He said: “It was a brilliant race. I trained in a swimming pool but I really enjoyed swimming out here in this beautiful reservoir for the first time. The cold water was a bit of a shock but then you get used to it.”

The 114 swimmers braved temperatures of around 15 degrees Celsius and depths of up to 170 feet (52 metres) in Kielder Water, which holds 2.5 billion bathfulls of water.

Liz Sidebotham took part in the 3.8k swim to raise money for Northumbrian Water’s adopted international charity, WaterAid. She said: “I completed the race in 1 hour and 33 minutes and I’m really pleased with my time.

"I’ve been a supporter of WaterAid for a long time and thought this was a fantastic opportunity to get involved because of the link with Northumbrian Water.”

The swimmers were presented with medals by Olympic Medallist and former World Record Holder, Jo Jackson.

Jo said: “I’m delighted to be in this beautiful location, supporting the swimmers at Kielder’s first dedicated swimming event. It’s a unique opportunity to get into the water here as swimming is never allowed under normal circumstances. It is a very deep and very cold, dangerous place to swim, but this was a special event organised by professionals, Vital Events.

“Hopefully there will be another open water swim here again next year and if there is I might even take part in the 3.8k!” 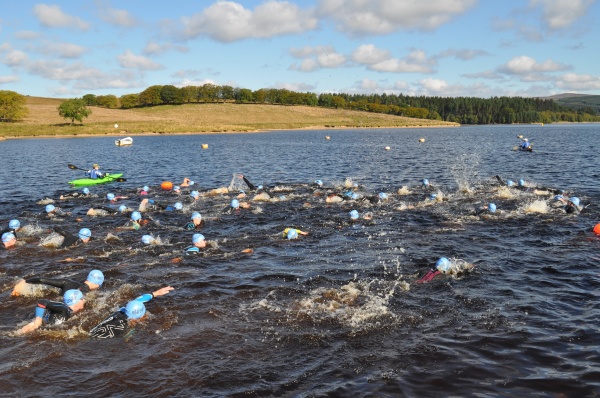