Hat-Trick for Ospreys at Kielder

Kielder Water & Forest Park has scored a hat-trick as a third osprey nest with chicks is revealed.

To have three breeding pairs so close to each other is a new record in England for the rare species, which re-colonised naturally in Kielder in 2009 after an absence of more than 170 years.

Tom Dearnley, Forestry Commission Ecologist, said: “This is fantastic news, the Kielder ospreys continue to go from strength to strength, thanks to the natural environment of Kielder, work of the Wildlife Rangers to provide safe nest locations and superb volunteers.”

Since 2011, visitors to the Park have delighted in following the story of the two breeding pairs and for a couple of seasons, an artificial nest platform erected by the Forestry Commission had attracted a third pair of ospreys.

Tom explained: “Everything seemed to be progressing towards successful breeding in 2013, but for unknown reasons no eggs were laid. This is not unusual for young, inexperienced osprey pairs.

“This year, mating was observed during April and the female was seen incubating thereafter. By mid-June it was confirmed that there was at least one chick on the nest.”

At over 250 square miles, the mix of forest and water is perfect for the species. The ospreys feast on trout from the largest man-made lake in northern Europe, Northumbrian Water’s Kielder Reservoir, and nest among England’s largest working forest.

Tom added: “We are also delighted to announce that thanks to several generous donations, we will be able to find out much more about our ospreys after they leave Northumberland as we will be fitting three young birds with GSM transmitters. These tiny ‘backpacks’ communicate with the mobile phone network and tell us where the birds are year round.”

With the other two well established nests having six healthy chicks between them, everything is on track for a record number of chicks to fly away from Kielder on their long migration to Africa in September.

In the meantime, cameras installed in the nests mean visitors can watch the action unfold on CCTV footage beamed live into Kielder Castle and Northumbrian Water’s Leaplish Waterside Park.

Fans of the famous birds can also keep up to date with them and the progress of the chicks by checking the blog at kielderospreys.wordpress.com.

Kielder Osprey Watch 2014 will run every weekend from 11am - 4.30pm until the chicks fledge in August, behind the Boat Inn restaurant at Leaplish Waterside Park.

This season, the Osprey Watch has a powerful new telescope generously funded by the Northumberland and North Tyneside Bird Club.

To find out more, go to www.visitkielder.com. 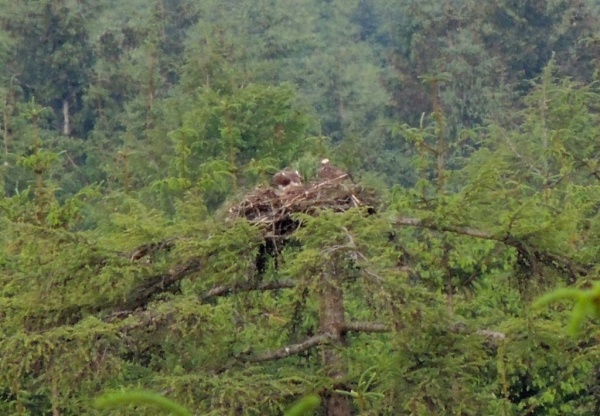