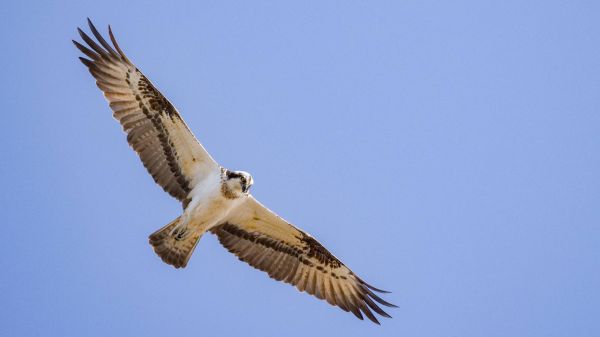 Hiding amongst the vast forest and tranquil waters of Kielder lies one of Northern England’s most outstanding conservation success stories; the return of the Osprey.

Following a long history of human persecution and pressure from egg collecting, this magnificent bird of prey was driven to extinction in England in 1840, and ultimately throughout Britain when the last bird in Scotland disappeared in the early 1900’s.

For years our summer skies were absent of their presence, until almost a century and a half after its extinction in Britain, the Osprey returned – remarkably – through natural recolonisation. A second chance.

Gradually, Ospreys returned to nest atop trees alongside lochs and lakes. First in Scotland, then, with a little support, into England and Wales.

In June 2009, the first Osprey pair raised three young at Kielder Forest; the first in over 200 years. Last year, in 2021, the Kielder population had risen to an impressive 7 pairs.

This incredible story of wildlife returning is not just one of success, it’s one of hope and promise for the future.

We invite you to join us for an experience like no other to celebrate Kielder’s magnificent birds of prey, which once again soar the summer skies.

This uniquely tailored cruise offers a truly special opportunity to watch the Kielder Ospreys as they soar overhead and fish the tranquil water. Your Wild Intrigue guide will share the history, ecology and inspiring conservation story of the Osprey, and their expert eyes and ears will ensure you have the best chance of watching the birds themselves.

In true Wild Intrigue style, Canapés and prosecco will be served on board, which can be enjoyed on this 2.5 hour sunset cruise as we travel Kielder Water, surrounded by the picturesque landscape.