Resurgent ospreys notch up a century in Kielder

The one hundredth osprey chick has successfully taken to the air in Kielder Water & Forest Park!

The milestone was reached when a chick called Fourlaws summoned up the courage to leave its nest and earn its wings in the 63,000 hectare (155,000 acre) Northumberland beauty spot.

Breeding ospreys returned to Northumberland in 2009 for the first time in over two centuries when a single nest produced three chicks.  Since then their success has delighted conservationists as Kielder becomes a key location for nature recovery, acting as a bridgehead for ospreys to continue re-colonising England.

Experts have been eagerly anticipating reaching the historic fledging century mark for weeks and thanks to cameras monitoring nests they had a front row seat.   The chick had been beating its wings and leaping into the air in recent days, a sure sign that the first flight was imminent. This year osprey couples occupied eight nests in the forest park, six of which produced offspring.

“To have 100 chicks successfully fledge in just thirteen years and by a bird that had been absent for so long is amazing. This is the restoration of a population, a reservoir of animals which can spread outwards creating a huge boost to biodiversity.  It’s full repayment for the effort invested in building nesting platforms in the years before their arrival and the work of the whole team involved in ospreys at Kielder.

“The significance of this size of population is that locally born birds are now being seen at other locations across the UK, as well as returning to Northumberland to raise their own families. It just shows what can be done with well managed habitats, foresight and collaborative working.”

"It's fantastic to see osprey numbers soaring. We now have a strong and sustainable population. Scores of people have contributed to the resurgence, not least our Wildlife Trust volunteers, who have shared their passion for ospreys with visitors to Kielder since 2009."

"Ospreys have become another iconic emblem of Kielder's fabulous wildlife. The combination of a well-stocked reservoir and the expansive forest has been a huge pull. Our unique Osprey Watching cruises led by Wild Intrigue whilst aboard our aptly named ‘Osprey Ferry’ have been a huge success with visitors as they have made lasting memories of their time with us.”

"With so many ospreys on the wing now this is the best time to spot them above Kielder Water.  We are so proud of what’s been achieved in Kielder and the fact that we’ve been to share this wonderful story with the public in a truly sustainable way.”

Juvenile ospreys may now be airborne, but there’s no let up for the parents.  They will continue to feed chicks, who never stray too far from the family nest. Learning to hunt for themselves is the crucial next stage.  They need to build up body fat as within weeks all the birds will embark on a hazardous migration as far south as sub-Saharan Africa – a 5,000 mile journey.  In two years time the youngsters will make their first return trip to the UK.

Notes to Editor
1.  A good place to potentially see ospreys is the Osprey Cabin at Tower Knowe visitor centre which overlooks Kielder Water.  Volunteers from Northumberland Wildlife Trust are often on hand.  Live pictures from nest cams are also being beamed back to this location and to nearby Kielder Castle for the public to enjoy.

2. Ospreys were once distributed widely throughout the UK, but persecution resulted in the species becoming extinct as a breeding bird in England in 1847 and in Scotland in 1916. Because of their historical decline they are an Amber List species. Chicks fledge about seven weeks after hatching and a fully grown adult can have a wingspan of over five feet. The bird normally breeds for the first time when it is aged between four and five years old. Males in particular have a strong instinct to return to the place of their birth. To find out more about Kielder ospreys visit the blog at https://kielderospreys.wpcomstaging.com which also has the latest images 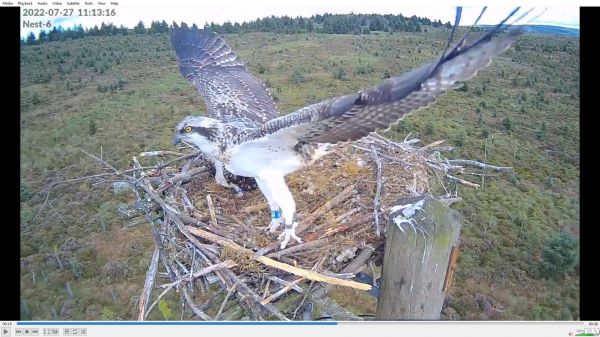