Just one year after her double lung transplant, a determined Northumberland mother is preparing to take on her first 10K, and she's bringing her family and friends with her along for the ride.

Sheena Robinson, from Greenhaugh, will be joined by more than 30 friends and relatives in the Active Northumberland Kielder 10k to help raise money for the Transplant Unit at the Freeman Hospital, Newcastle.

The mum of one was diagnosed with pulmonary hypertension in 2002, a type of high blood pressure that affects the arteries in the lungs. It makes it harder for blood to flow through the lungs, causing shortness of breath and fainting.

Over the years, Sheena's condition started to deteriorate, with simple, everyday tasks like climbing the stairs, becoming more and more difficult, before she was put on the transplant list last year for two new lungs.

She was only on the list for three weeks before a donor was found, and the huge, life-saving operation was carried out on August 21, 2018. Sheena spent more than three months in hospital recovering.

Now, more than 30 friends and family are planning to show their support for Sheena and the efforts of the team at the Freeman Hospital who saved her life, by taking on the stunning Bull Crag peninsula of Kielder Water with her on Saturday October 12, 2019.

Naming themselves the ‘Robinson Runaways', the group includes both men and women of all sporting abilities from the towns and villages around Kielder, aged 18 years old up to 70 years old.

Sheena said: "I used to love running when I was in school, but I deteriorated quite quickly after my diagnosis in 2002 so the Kielder 10K has never been on the radar before because I've always been too ill.

"I was lucky enough to receive a double lung transplant last year and I'm doing great now. Obviously I haven't done any exercise for years, so I'm just building my stamina up gradually.

"I'm so grateful to the team at the Freeman Hospital who were just brilliant and I hope my story inspires others and gets people talking about organ donation and how it can truly change lives."

June said: "Sheena's life-saving operation and her amazing recovery, in little over a year too, is just incredible and she's an inspiration to us.

"We're really looking forward to supporting an event close to home and being able to give a little something back to the Freeman Hospital."

The Active Northumberland Kielder 10K takes place on Saturday, October 12, as part of an exciting weekend of races on the banks of Kielder Water.

The weekend is delivered by Events of the North in conjunction with Northumbrian Water, Active Northumberland, Northumberland County Council and Northumbria Healthcare NHS Foundation Trust.

Race Director Steve Cram said: "Sheena's story is uplifting and inspirational and we're delighted that the Robinson Runaways have chosen to tackle the Active Northumberland Kielder 10k to raise funds for such a great cause.

"The North East hosted the World Transplant Games recently, which brilliantly showcased that people can successfully return to sport after a transplant. Sheena offers even more proof of that and we're really looking forward to welcoming her and her friends and family as part of an amazing weekend of running on 12 and 13 October."

Anyone who wants to support Sheena and the ‘Robinson Runaways' in their fundraising efforts for the Transplant Unit at the Freeman Hospital, can donate on Just Giving at https://www.justgiving.com/crowdfunding/robinsons-runaways. 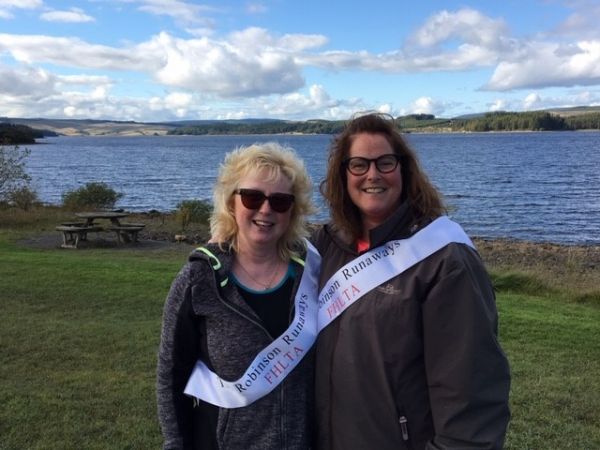