Data from Kielder Water & Forest Park today (20 August) indicates that one of this year’s two tracked osprey juveniles. Chesters, from Nest 1A, set off on migration on this morning.

This is quite early for this part of the country, although she has been flying around a lot so has experience under her belt. You may wish to amend draft.

The nine remaining osprey chicks from this year’s breeding season are currently earning their ‘wings’ and getting set to follow her on the epic journey to Africa or Iberia.

This is the best year since 2016 with 18 eggs known to have been laid and 11 chicks surviving to be ringed.  Unfortunately, Cragside, the heaviest ever chick from Nest 5A has been missing since Sunday 4th August, so the chance of her survival is slim.

This year has proved to be particularly challenging for the birds with three chicks dying on different nests due to the wet and windy weather and fledging ages were slightly above average, again, probably due to the weather, as there were days with above average rainfall and feather development is slower in damp conditions.

Kielder Osprey Project Lead Volunteer, Joanna Dailey said: “To start seeing ospreys flying around Kielder is wonderful given the tough conditions they were born into this year. The youngsters are now gaining flying and fishing experience with the adults before they head off to sunnier climes.”

Osprey mothers usually leave on migration around the middle of this month, with the fathers and youngsters following individually at the end of August.

Enthusiasts can read this year’s timeline of activity at https://kielderospreys.wordpress.com/timeline-2017/ and watch the birds through a nest camera broadcasting at Kielder Castle Café. 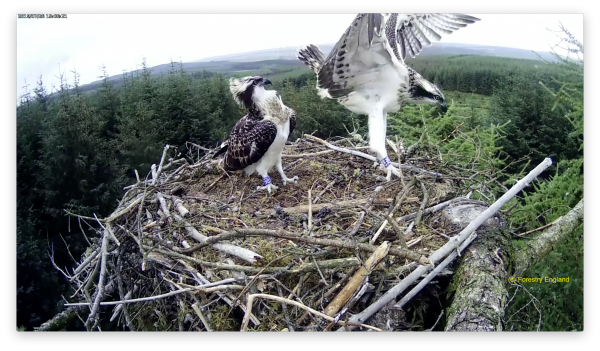