This week, a further 240 water voles have been released into streams flowing into the east end of Kielder Reservoir (to link with water voles released last year), by the ‘Restoring Ratty’ water vole reintroduction project.  This release takes the total number released to 1205 since June 2017.

The released voles have been bred in captivity from individuals captured in the Pennines and North Yorkshire and over the border in Scotland.

The project is aimed at the reintroduction of water voles to the Kielder Water and Forest Park area of Northumberland and has all been made possible by National Lottery players through a grant of £421,000 from The National Heritage Lottery Fund (HLF).

This release, the fifth since the project started, included the release of the 1000th water vole and by the end of the year, approximately 1400 water voles will have been released.

The release also marked the end of a year-long university placement with Northumberland Wildlife Trust for Joel Ireland, student at Trent University, who celebrated the end of a wonderful year by releasing his first water vole.

Joel said: “This is a great project to have been involved in and releasing my first water vole was such a wonderful way to end what has been a great year with Northumberland Wildlife Trust.”

All signs indicate that water voles released in 2017 and 2018 are thriving well with some of them travelling up to 12km from their release sites, with potentially breeding voles being found around 5km from their original release sites.

With survey season just starting and volunteers are out and about looking for signs of more water voles. At a site near Kielder Campsite, they seem to be doing especially well.  Up to 80% of a water vole population can be lost over winter; hopefully the mild winter of 2018/2019 will mean a higher survival rate and a good breeding season.

Graham Holyoak, Restoring Ratty Project Officer said: “Over the past two years we have learnt so much about water voles from the past four releases. Knowledge such as the fact that water voles will happily stay where they have been released and form populations if they are in very narrow burns, whilst, on bigger streams a few will stay but many tend to disperse more, will help form our future water vole conservation efforts.” 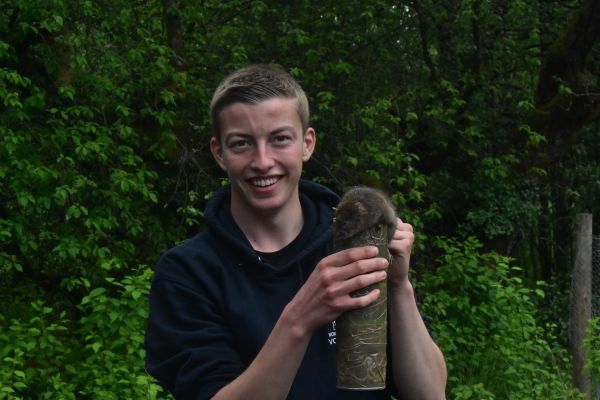