Around 360,000 salmon and 20,000 sea trout have been released into tributaries of the River Tyne this year as Kielder Salmon Centre celebrated its 40th anniversary.

The centre was built in 1978 to compensate for the building of Kielder Reservoir – the biggest man-made lake in Northern Europe – which cut off around 7% of the River Tyne catchment including some of the best spawning streams for salmon.

This year has also seen it create a new £100,000 visitor centre which opened to the public in September as the centre focuses on becoming an education and conservation centre of excellence. This received the Royal seal of approval during a visit by the Prince of Wales the same month.

Richard Bond, who has been the centre’s hatchery manager since 2005 said: “Over the 40 years we have released millions of salmon and sea trout into the River Tyne’s tributaries to compensate for the fact they cannot reach their natural spawning grounds.

“We just give them a helping hand, and it helps to contribute to the now thriving River Tyne. The river has gone from being heavily industrialised to one which is now one of the best salmon rivers in the country.

“It is a real success story and one which has happened for a number of reasons, predominantly due to improvements in water quality as well as work by ourselves and our partners to make improvements to fish passage and habitat.”

In fact, work to build a fish pass on the River Derwent at Shotley Grove – a final piece of a jigsaw which will see more of the river opened up for fish access - is due to be complete in the coming weeks and is an example of partnership projects which have helped bring the River Tyne and its tributaries to life.

The recovery of River Tyne salmon stocks started in the late 1960s and was coincident with improvements to estuarine water quality and was aided by changes to environmental legislation, changing attitudes to conservation and a decrease in industrial pollution.

Through the centre, the Environment Agency now works on academic research projects, including innovative work to hand rear one of the UK’s most endangered species, the freshwater pearl mussel.

Richard added: “The new visitor centre has created a more interactive experience for visitors and allows them to get up close with species we aim to protect – including the iconic salmon and the critically endangered freshwater pearl mussel. It gives people the chance to understand the fascinating world that lies below the surface of the river.”

Kielder Reservoir plays an important role in preserving drinking water for the North East as well as supporting other abstractions along the River Tyne. It also has the capability to support flows in the rivers Wear and Tees if required and plays a role in reducing the risk of flooding on the North Tyne.

This summer, during particularly hot and dry weather, it played a vital role in reducing the risk of fish deaths in the upper reaches of the Tyne estuary. Additional releases made by Northumbrian Water at the Environment Agency’s request between 22 June and 10 August amounted to 35 billion litres of water – a whopping 14 billion Olympic-size swimming pools.

During summers such as in 2018 a lack of freshwater flow coupled with high water temperatures in the Tyne estuary can lead to a lack of oxygen in the water. These conditions make it difficult for adult salmon returning to the River Tyne from the sea to survive. This is an occasional seasonal issue affecting migrating fish which has occurred in the past during prolonged dry and hot weather.

Phil Rippon, Fisheries Technical Specialist for the Environment Agency in the North East said: “We continuously monitor the oxygen levels in the estuary during conditions such as we saw this summer and do what we can to help migrating fish reach their spawning grounds.

“This includes additional releases of water from Kielder reservoir to increase freshwater flows when oxygen levels in the estuary become critical. Previous research from similar summer conditions has shown that releases from Kielder sometimes triggers upstream movement of salmon and sea trout, helping them during hot and dry conditions. These additional releases have undoubtedly saved many salmon in 2018.”

The Environment Agency will continue to work with Northumbrian Water to monitor the conditions in the Tyne estuary. 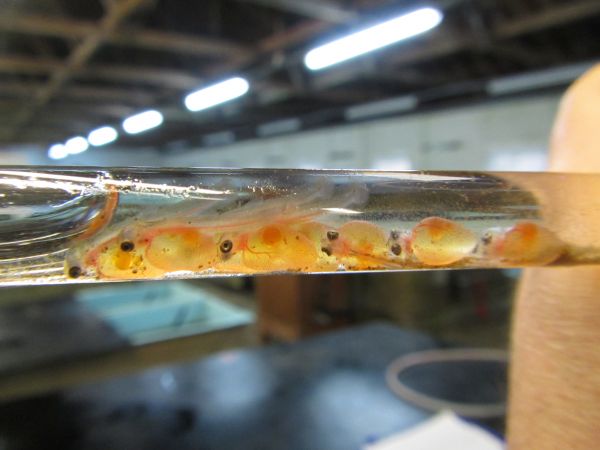