A beautiful, wood sculpture positioned on the new Wild Walk at near Bakethin Nature Reserve at Kielder Water & Forest Park, is astonishing visitors, while also offering a rest for weary walkers.

Within the two arms and back of the seat are four sturdy otters, providing handy arm and shoulder rests, while the undulating seating area depicts the rolling water of the Kielder Reservoir itself. A salmon is swimming along close to the surface while another glides along in the depths.  Alighting on the rear of the bench with its wings still outstretched for balance is a magnificent osprey, representing the 10th successive year that ospreys have nested at Kielder. From one pair in 2009, the Kielder osprey population has now grown to five nesting pairs in 2018!

The front base of the wildlife bench is full of wonderful nooks and crannies, some of them natural to the cedar wood that Tommy carved from, and others adapted to look like water pools and holes for wild creatures.

Tommy (54) was born in Consett and left school just as the steelworks were closing down so there were few opportunities for work.  The only thing he’d enjoyed at school was art, but in the early 1980s,  art wasn’t a career option locally and college was out of the question.  Over the next 25 years or so, Tommy took various labouring jobs but often found himself out of work and life was tough.

When he was 43, Tommy was working as a tree feller in a forest and he happened to see a wood carving of a giant mushroom in the forest. He’d never seen anything quite like it, but it totally inspired him. He says:  “I thought to myself -  I could have a go at that!” So, he worked on a series of his own giant mushrooms for weeks until he’d perfected them.

Eleven years on, and still totally self-taught, Tommy is now an established, award-winning wood carver, working nationally and internationally. He carves beautiful works of art in wood for all manner of people and places from municipal parks, and city centres to private houses, stately homes, gardens and forests.

All Tommy’s work is carved from wood that has come from a sustainable managed forest, and from trees that have either fallen naturally or trees that have become diseased or dangerous.

He particularly enjoys carving people, as well as animals, and takes great care to perfect facial expressions. Considering most of his work is done with a chainsaw, this is quite an achievement. Fantasy creatures - fairies, angels and even ogres are another of his favourite subjects and he loves to see reaction from clients when he has completed a job.

He says: “I’m very lucky to have found something I love doing, which can earn me a living. Not many people get that chance.”

Lynn Turner, Director of the Kielder Water & Forest Park Development Trust, says: “Tommy’s Wildlife Bench is becoming a big draw for visitors to Kielder. They love its simplicity, and the way it blends into the landscape naturally as if these creatures were already living within the carved wood. ‘Living Wild at Kielder’ is a project that helps people to enjoy this area’s special animals, birds and plants and this carved seat has been positioned as a beautiful resting place along our new Wild Walk at Bakethin Nature Reserve. I would like to thank National Lottery players and the Heritage Lottery Fund for supporting this project.”

You can see Tommy’s sculpture along the new, easy 1.2 km Wild Walk at Bakethin Nature Reserve. It’s one of a series of new trails at Kielder which can be downloaded on the View Ranger App.

For more information about Tommy Craggs and to see galleries of his work, please visit: www.treesculpting.co.uk 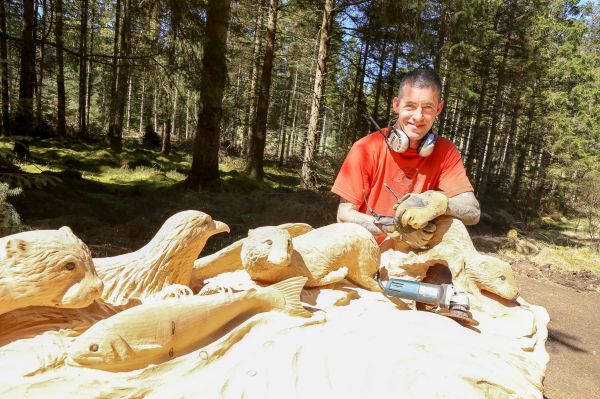