The tenth year of the Kielder Osprey Partnership has given the partners a brilliant surprise late in the season - staff from the Forestry Commission recently discovered a fifth nest in Kielder Forest! The pair on the nest appear to have raised one healthy chick.

The location of the nest makes it difficult for staff to get close, although it is thought that one of the parents is a bird from Moffat.

Tom Dearnley, Ecologist with the Forestry Commission, said, “The discovery of this nest is brilliant news for Kielder.  They are still a very rare species in England and we’re thrilled that they are doing so well here.”

This years’ chicks from the four pre-existing osprey nests in Kielder Water & Forest Park have now been successfully ringed.  On the four nests, 12 eggs were laid in total; two did not hatch and sadly, two chicks perished, leaving a total of eight birds to be ringed.

Experts from the Forestry Commission carried out the ringing process, which is done quickly with no harm to the bird. Various measurements are taken including weight, which helps to determine the sex of the chick with females typically heavier than males.

The process of ringing provides ecologists and ornithologists with information on subjects such as migration and feeding behaviour. It is a brief and painless but key moment in the early lives of the osprey chicks and is carefully managed under licence.

This year, staff from partner organisations were delighted to be involved in the ringing process, including three colleagues from Northumbrian Water who were able to observe via the ‘Just an Hour’ employee volunteering programme.

Following the tradition started last year of naming all the chicks with local names beginning with ‘A’, this year has seen the eight chicks all given ‘B’ names. Female Binky is named for the Binky Burn which flows through Kielder Forest. The other birds have been called Broomlee, Byrness, Bamburgh, Bywell, Blackaburn, Beldon and Belling.

Joanna Dailey, Kielder Osprey expert volunteer, said, “Kielder Water & Forest Park has proved to be a successful home for ospreys, with excellent habitat and food supply. It is a fantastic landmark that we have now reached out tenth year of successful breeding. The hope is that these chicks will survive into the future and contribute to the recovery of this spectacular bird in the UK.”

The chicks are currently in the process of fledging, with a few having made successful short flights already, and will be migrating south from late August.

The birds can be seen by visiting Osprey Watch, which takes place at Northumbrian Water’s Kielder Waterside on weekends, and Wednesdays from 10.30am - 5.00pm until Sunday 19 August, where knowledgeable volunteers from Northumberland Wildlife Trust are on hand to show visitors a nest through high-powered scopes and view live footage from the nests on screens in the osprey cabin. Live footage from the nests can also be seen in the café at Kielder Castle.

Part of the Kielder Living Wild project, which has been made possible thanks to National Lottery players and a grant from the Heritage Lottery Fund (HLF), The Kielder Osprey Project, is a partnership between Kielder Water & Forest Park Development Trust, Forestry Commission, Northumberland Wildlife Trust, Northumbrian Water and Calvert Trust Kielder.

Project partners are working hard to ensure that the ospreys are here to stay by maintaining a high quality habitat in Kielder Water & Forest Park and safeguarding and monitoring the nest sites.

This years’ Osprey Watch is also supported by players of The National Lottery through a grant from Heritage Lottery Fund.

To post osprey sightings go to the VisitKielder Facebook page at www.facebook.com/kielder or the VisitKielder twitter feed at www.twitter.com/visitkielder. You can also keep up to date with the ospreys at www.kielderospreys.wordpress.com 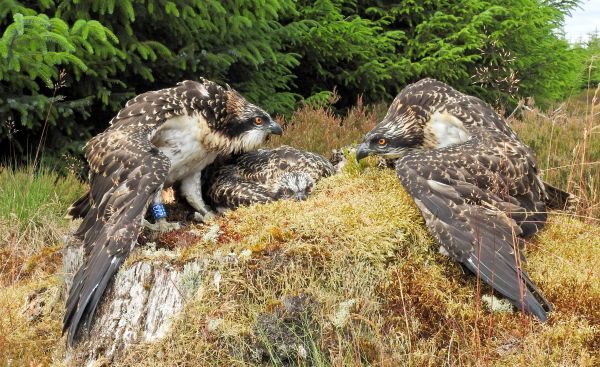