2018 marks a decade of Ospreys breeding at Kielder

The return of ospreys to Kielder is one of our most exciting and successful conservation stories. Although ospreys are found worldwide, in the UK they are still relatively scarce with fewer than 300 breeding pairs. In England, ospreys breed only in Cumbria, Kielder (both natural re-colonisations) and Rutland Water (a successful translocation project). 2018 marks the tenth year that ospreys have bred at Kielder Water & Forest Park, situated on the doorstep of the Northumberland National Park.

Historically, ospreys were distributed widely throughout Britain, however heavy persecution and egg collection in the 19th and 20th centuries resulted in dramatic population declines. They became extinct as a breeding bird in England by 1840 and persisted in Scotland only until 1916, although they still occurred as passage migrants. Ospreys remained functionally extinct in Britain until 1954, when they re-colonised naturally (most likely from Scandinavia) at Loch Garten, Abernethy Forest Reserve, Scotland.

For many years, Kielder has been a regular stopping point for ospreys migrating to and from their breeding grounds in Scotland. In 2006, a young male was seen to be summering in the local area, prompting the Forestry Commission to establish nesting platforms at various suitable points within the Kielder Forest area. In 2008, one of the platforms was moved and additionally splattered with white paint to simulate osprey droppings from recent use.  In 2009, a platform was occupied by an unringed pair of ospreys who raised three chicks. These were the first ospreys to breed in Northumberland for around 200 years. Since 2016, Kielder has been home to four active osprey nests.

Once the birds had established themselves, it was clear that we needed to share them with visitors. For a number of years, Northumberland Wildlife Trust have run Osprey Watch from Northumbrian Water’s Kielder Waterside, a busy and popular family holiday park on the edge of Kielder Water. Osprey Watch is almost entirely volunteer led. Typically, there will be three volunteers working on an Osprey Watch day, showing visitors nest 1A through the scopes and manning the cabin with live video streams from three of the nests to further explain the lives and stories of these fantastic birds.

The Heritage Lottery Funded Living Wild at Kielder project has enabled us to employ a seasonal osprey assistant in 2017 and 2018. This has allowed us to extend the season, offering extra days of Osprey Watch and additional family activities. Visitor numbers more than doubled in 2017, compared to the previous year. One of the best things about the location of our Osprey Watch is that a large proportion of our visitors are not people who would consider themselves to be particularly interested in wildlife or birdwatching, but who have come over to see what we’re all about as part of their day out at Kielder Waterside. It’s always a treat to see families learning and enjoying themselves with our passionate volunteers, and who knows what kind of spark we may be setting off in the young people who get to see these magnificent animals for the first time…

To further expand the osprey watching opportunities at Kielder, we’ve teamed up with Calvert Trust Kielder, which  is a wonderful charity that challenge disability through outdoor adventure activities. Through the summer, Calvert Trust Kielder offers wildlife and osprey cruises for visitors, and our volunteers act as guides on the boat. Although it can’t ever be guaranteed, there is a high success rate for these cruises seeing ospreys flying overhead, and sometimes fishing in the inlets of the reservoir. £3 from each ticket sold is donated to Osprey Watch, to help make it sustainable. Calvert Trust Kielder has also offered us invaluable advice in constructing a platform at the Osprey Watch cabin and adapting a tripod to make sure that wheelchair users are able to use the scopes to view the birds on the nest.

2017 saw a landmark achievement for the Kielder ospreys, with the 50th chick fledging since the ospreys re-colonised. Chicks from previous years have been seen at several locations in the UK, including the Lake District, Balgavies Loch, Geltsdale and Derwent Reservoir, which is great news for the further recovery of the osprey in the UK. 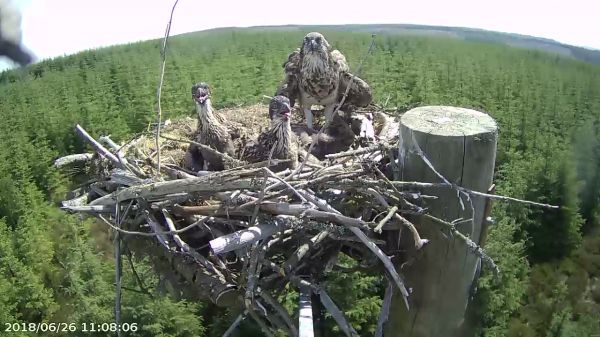