One hundred and sixty water voles have been released into streams flowing into the north shore of Kielder Reservoir, Deadwater Burn near the Kielder campsite and Kielder Burn by the ‘Restoring Ratty’ water vole reintroduction project.

Since June 2017, 730 water voles have been released into the Kielder area.  The released voles have been bred in captivity from individuals captured in the Pennines and North Yorkshire in 2017 and over the border in Scotland in 2016.

All signs indicate that water voles released in June and August 2017 are thriving well with many of them travelling up to 12km from their release sites, with potentially breeding voles being found around 5km from their original release sites.  A further 260 voles are set to be released this August.

‘Restoring Ratty’ is a five-year partnership project between Kielder Water & Forest Park,Northumberland Wildlife Trust, Forestry Commission England and Tyne Rivers Trust, aimed at the reintroduction of water voles to the Kielder Water and Forest Park area of Northumberland. It has all been made possible by National Lottery players through a grant of £421,000 from the Heritage Lottery Fund (HLF).

The water vole was once a common and familiar mammal along our ditches, rivers and streams. Unfortunately, habitat declines, pollution of waterways, industrialisation of agriculture, housing development and predation by American mink that escaped from fur farms, have all led to severe water vole declines since the 1960s.

Out of all the staff and volunteers at Kielder this week, probably the most excited were 55 pupils from two schools who had the experience of a lifetime when they were invited to roll up their sleeves and help the project team with the releases.

The first group to have a ‘Ratty’ experience were eighteen pupils from Terrington Hall School in North Yorkshire.

The Year 5 pupils, aged between 10 and 11 and their teacher Mary-Ann Pilmore are no strangers to water voles, having previously helped to trap six of them near their school for the captive breeding programme as part of the project’s three-way schools partnership.

Inspired by their efforts, the pupils were so keen to release the babies from the voles they helped to trap, they were prepared to travel over 125 miles and stay overnight at the Calvert Trust.

The second group of pupils only had to travel from Bellingham Middle School but they were no less excited. Escorted by teacher Anna Veitch, 35 year 5 pupils aged between 9 and 10, travelled to the Cat Cleugh Field (adjacent to  Kielder Village) in mini buses provided by the Calvert Trust.

The school was selected by the Restoring Ratty project as it is so close to the release site and was decided it would be a wonderful opportunity for the pupils to get ‘hands on’ with the wildlife which is literally on their doorsteps.

At the end of a busy week, Graham Holyoak, River Projects Manager at Tyne Rivers Trust, the organization that led the first phase of the project to create a safe environment ready for re-population says: “This is our third release after two successful releases in 2017 taking numbers released up to 730.  Monitoring of the voles released in 2017 have shown they are doing well so this third release will help boost the breeding population in Kielder by allow individuals spreading out to find partners.

“Releases consist of an intense 10 days of work and the help of staff and volunteers from the partner organisations is invaluable - so a huge thank you, and roll on August for the fourth release which will be even bigger.” 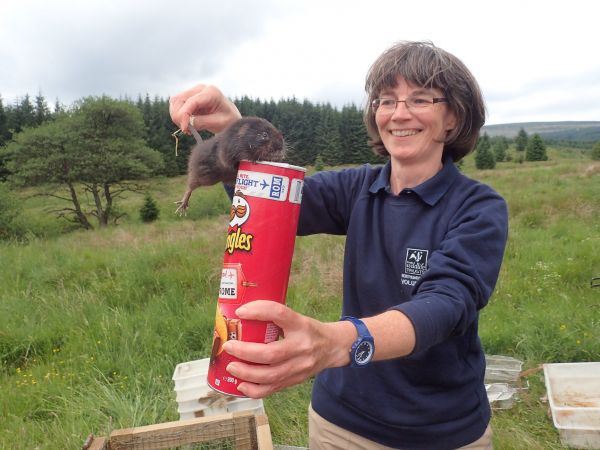