Thousands tackle Britainâ€™s most beautiful Marathon and half marathon

The second, and final, day of the Active Northumberland Kielder Marathon is now over, with more than 1500 competitors taking part in Britain’s most beautiful Marathon, Half Marathon and Junior runs today.

Around 4,500 visitors, competitors and spectators descended on Northumbrian Water’s Kielder Waterside park for the day’s events and were treated to a great day of entertainment and athleticism by runners of all ages and from across the country.

In the Marathon, more than 670 runners made their way around Kielder Water, northern Europe’s largest man-made lake, and winning in a time of 2 hours 46 minutes 18 seconds was Russell Maddams from Keswick Athletic Club.

The Half Marathon, which started on Northumbrian Water’s Kielder Dam, saw 894 runners take on 13.1 miles around the south side of the reservoir.

Winning the half, and finishing in a time of 1 hour 20 minutes 29 seconds, was Gosforth Harrier Benedict Moore. In second place was Sunderland Stroller John Cook (1 hour 23 minutes 11 seconds) and in third was Chris Snowball from Ashington Hirst Running Club (1 hour 23 minutes 59 seconds).

In the Junior Events, more than 162 children took part in a number of races held around the Kielder Waterside site while cheered on by families and spectators.

The marathon weekend is in its eighth year and is run by Events of the North, a company led by Olympians Steve Cram and Allison Curbishley, in conjunction with Northumbrian Water, Active Northumberland, and Northumberland County Council.

Race Director Steve Cram said: “It’s been an amazing day and the perfect way to finish off what has been an incredible weekend here at Kielder.

“We’ve seen some amazing running and performances against what is surely Britain’s most beautiful backdrop for any running event.

“I’d like to thank everyone who took part, everyone who came to support their friends and family and all of our partners and staff who helped us put together the Kielder Marathon Weekend.

“It’s thanks to everyone’s hard work and determination that it’s been such a huge success. Bring on next year!”

The half marathon and marathon races draw the weekend’s events to a close and have seen over X people take part in all of the races across the weekend over.

David Hall, Head of Leisure Strategy at Northumbrian Water, said: “More than 8,500 people have been to Kielder Waterside to watch, take part and enjoy the events this weekend and the whole place has been abuzz with excitement from start to finish.

“It’s an honour and a pleasure for us host this incredible event and I hope everyone who has been to Kielder over the course of the weekend has enjoyed themselves as much as we have.” 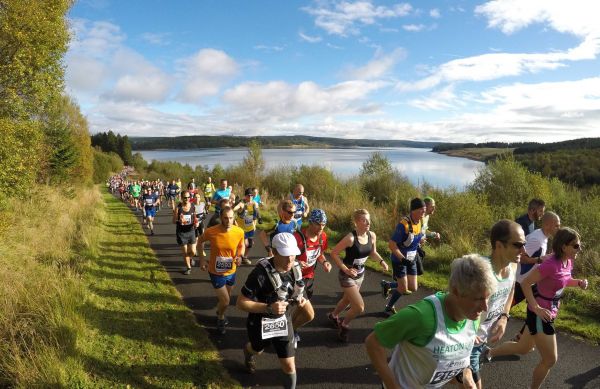 Home to Northern Europe's biggest man made lake, the largest working forest in England and the darkest skies in England, Kielder Water & Forest Park is the ideal destination for group travellers.