Full marathon and first-ever half marathon run on day two

A record number of runners descended on Kielder Water & Forest Park, Northumberland today for ‘Britain’s most beautiful marathon and half marathon (4 October).

And Middlesbrough’s Matthew Jones, was crowned the new champion of the Active Northumberland Kielder Marathon, while Karl Taylor was the inaugural winner of the Kielder Half Marathon, setting the record at 1 hour 14 minutes and 35 seconds.

Northumberland County Council worker Karl, who is aged 24 and from Amble, Northumberland said: “I thought that I would come quite high up but I didn’t expect to win the first half marathon. It’s also my first event at Kielder - it’s a beautiful race but it’s really hard.”

She said; “I have been to Kielder once, years and years ago, when I came to do a report about Kielder as the most tranquil part of the UK. I think we’re disturbing that peace a bit today! – there are an awful lot of people here sounding fantastic and it’s just spectacular.”

Around 850 runners made their way around northern Europe’s largest man-made lake, Kielder Water in the sixth year of the Marathon, which is held every year at Northumbrian Water’s Leaplish Waterside Park.

Winner Matthew Jones, aged 34, who crossed the finish line in 2 hours 43 minutes and 02 seconds said: “I feel elated, and a bit tired. It was a bit of a battle at the front but it’s my first year and I loved it, I enjoyed every minute.”

Matthew, who is a doctor of cardiology in Middlesbrough, has taken the title off three-time marathon winner Ceri Rees, who gave North East runners a sporting chance this year when he decided not to take part.

Gemma, who is a member of Saltwell Harriers running club and completed the race in 3 hours 21 minutes and 53 seconds, said: “It was gorgeous, really tough in parts but it’s such a stunning race. I just thought I’d come out for a lovely run, I didn’t expect to win.”

Both events were the show stoppers to a full weekend of activities which included the Kielder 10K, Kielder Run-Bike-Run, Junior Races and a series of walks.

Tynedale Harrier, Christopher Jackson, aged 15, from Allendale, Northumberland was thrilled to have won the Centurion. He said: “I’d hoped to win. It was good fun and I want to be back next year and I think I would like to do the Kielder 10K.”

Kielder Marathon attracts runners and outdoor adventure enthusiasts from around the world to the dramatic setting and unique course.

Councillor Val Tyler, Cabinet member for Arts, Leisure and Culture at Northumberland County Council, said: “The addition of the half marathon to this year’s event shows the popularity of Kielder and Northumberland for outdoor activities.

“The county has a very strong network of running clubs and growing number of runners. It is also an excellent place for walking, and as the Tour of Britain has shown, more and more people are supporting and taking up cycling.” 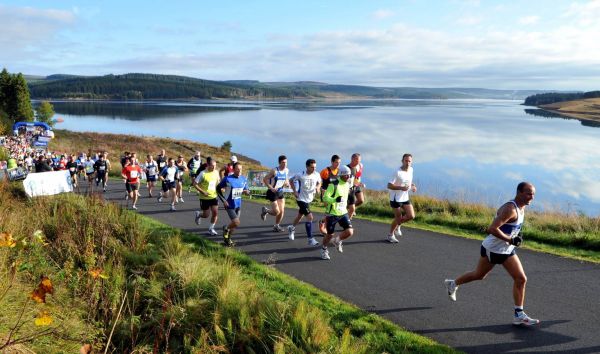