Britain’s most beautiful marathon brought a couple together and united them in a beautiful moment on Sunday 6 October.

As Marc Kelly, 33, crossed the finishing line of Salomon Kielder Marathon in Northumberland, he got down on one knee, and not out of exhaustion…

The paramedic, from Newbiggin-by-the-Sea, had carried an engagement ring all the way round the 26 mile course around Kielder Water, northern Europe’s largest man-made lake, to propose to his partner, Julie Barnes.
The pair met at the school where Julie, aged 33, is a teacher and Marc is a school governor, but the famous sporting event was responsible for their blossoming romance two years ago when Julie sponsored Marc for the 2011 Kielder Marathon and a first date followed.

As Marc approached the finishing line this year, he changed into a t-shirt which he’d also carried on the race and it read ‘Will you marry me Julie?’ He popped the question at the end.

Julie, also from Newbiggin, who had no hesitation in saying yes, was overwhelmed. She said: “It was a complete surprise, everyone else was in on it but I was totally oblivious. Good job I put my glasses on!”

Marc said: “In 2011 my time was 6hrs 22min so I improved this year with a 5hr 40min-ish time. It would have been even quicker if I hadn’t stopped at the 800m mark to change into my proposal t-shirt!

“I decided to propose here because I thought it was something on a grand scale and I’ve been planning it the last three or four months.

“I felt emotional afterwards, especially after running 26 miles – it certainly gave me something to think about on the way around!”

Billed as the most beautiful marathon in Britain, more than 1000 runners entered to make their way around northern Europe’s largest man-made lake, Kielder Water.

The full weekend of events, including Kielder Junior Runs, Kielder 10K, Kielder Run Bike Run and the main marathon itself, attracts runners and outdoor adventure enthusiasts from around the world to the dramatic setting and unique course. 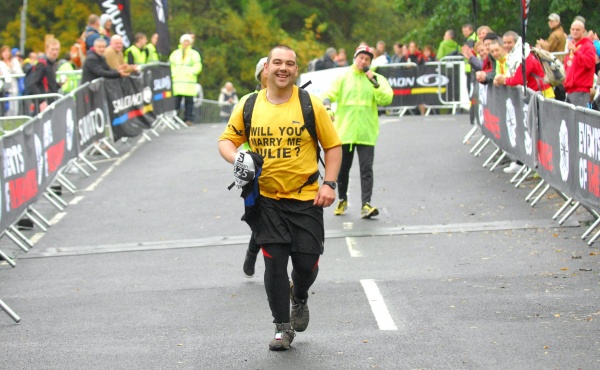