The edge of Empire 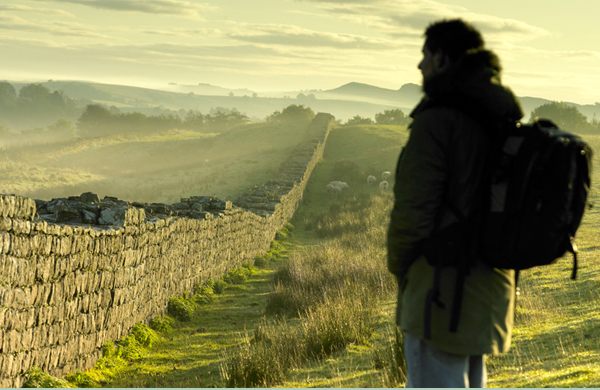 Introduction:
Northumberland is fortunate in having some of the best researched and best documented remains of Britain’s Roman heritage. Other places in Great Britain have Roman remains. But Northumberland’s Roman story is different. And because it is different, it is special. Marching camps, signal stations, campaign roads, a soldier’s life lived on the edge and, most remarkable of all, the World Heritage Site of Hadrian’s Wall. Hadrian’s Wall is accessible by bus, by rail, on foot or by bike. Leave the car behind. Forget about navigating your own way. Catch any number of public transport options.

Arrive: Corbridge
Here’s why: St Andrew’s church in Corbridge has a complete Roman archway inside and the village is ideal for boarding the AD122 Hadrian’s Wall bus service. Each Roman site along the entire length of Hadrian’s Wall has a different story to tell: Corbridge fort was on the Stanegate frontier; Chesters has its bath house and at Brocolitia the god Mithras makes his presence felt. Housesteads is the classic Roman fort with a  breathtaking hilltop position. Vindolanda has a brand new museum and the Roman Army Museum at Carvoran sheds light on the soldiers’ life.

In Roman times Corbridge was a bustling town and supply base for collecting food and provisions. Today at Corbridge Roman Town wander through the streets and be transported back to Roman Times. Make sure you visit the museum to see the famous Corbridge Hoard, on eof hte most significant finds in troman history.

Depart: Corbridge
Here’s how: All the details of the AD122 Hadrian’s Wall seasonal bus service and the network of other local bus services serving Hadrian’s Wall Country are on www.hadrians-wall.org Rover tickets are available including discounts for online advanced purchases.

Did you know…
Chew Green - a Roman military complex (unexcavated but with lay-by and interpretation board) 9 miles west of Alwinton in the Upper Coquetdale valley. Access is either on foot via the Pennine Way National Trail or by car (single track road). Before planning your journey check with the Otterburn Training Area Range Control Office (01830 520569) for information on current training activity near Chew Green or use http://www.northumberlandnationalpark.org.uk/chewgreen

Walwick Hall  Set in 100 Acres of stunning Northumberland countryside and perfectly located for exploring Hadrian’s Wall, Walwick Hall blends the comfort and elegance of an english country retreat with a distinctively modern spirit to bring guests a unique, luxury experience that’s a world away from the norm.

Visitors to Corbridge Roman Town can walk along the main street of this Roman garrison town, flanked by the remains of granaries, a fountain house, markets, workshops and temples.

Set high on a dramatic escarpment on Hadrian's Wall World Heritage Site, Housesteads Roman Fort takes you back to the Roman Empire.

Country house boutique hotel with a collection of self-catering suites and upmarket Dining and Spa. 7ml from Hexham and sits atop of Hadrians Wall.