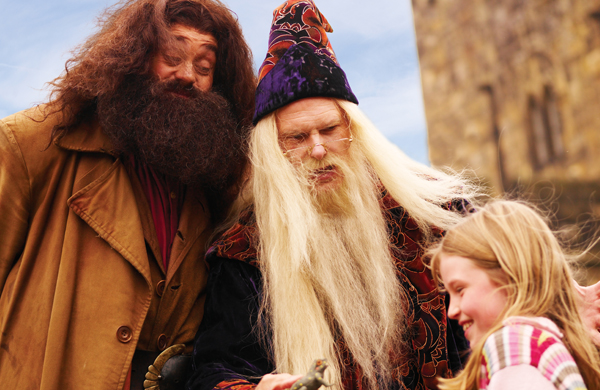 Introduction:
TV and film companies love Northumberland. Easy to access, spectacular landscape and locations as varied as anyone could wish for, this is a film maker’s dream. So step into the limelight and follow in the footsteps of some famous stars of stage and screen.

Arrive: Alnwick
Here’s why: In 1983 actor Rowan Atkinson brought Blackadder to Alnwick Castle and a TV legend was born. The castle was also the setting for the first scenes of “Elizabeth” starring Cate Blanchett in 1997 and a certain young wizard learn to fly a broomstick and play Quidditch here in 2001.

Arrive: Warkworth
Here’s why: Part of the impressive ruins of Warkworth castle doubled as the Tower of London in the film “Elizabeth” (1997) and William Shakespeare set some scenes of Henry IV Part 2 here.

Arrive: Amble town centre (follow unclassified coast road to Low Hauxley)
Here’s why: The town of Amble, like some film stars, has had a face lift in recent years transforming the Town Square and Marina into areas fit for filming whilst Low Hauxley and Druridge Bay to the south of the town starred in the 2011 TV crime series “Vera” with award-winning actress Brenda Blethyn taking the main role.

Arrive: Woodhorn
Here’s why: A great place to discover the social history of Northumberland’s coal mining past. But the “must see” is The Ashington Group of works by the Pitman Painters, which inspired the internationally acclaimed play of the same name written by playwright Lee Hall and staged in London and New York.

Macdonald Linden Hall Golf and Country Club is an impressive 18th century manor house nestled in 450 acres of private grounds. Whether you fancy a round of golf on the 18 hole course or would prefer to be pampered in the health club you are sure to enjoy your stay. In the evening choose from fine dinign in the AA rosette Dobson restaurant or an informal meal in the Linden Tree pub.

The second largest inhabited castle in the UK, home to the Percy family for 700 years and filming location.

Set in a quaint Northumberland village, this hill-top fortress and hermitage offers a fantastic family day out.